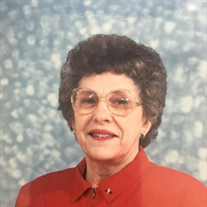 Emma Lorene Marshall, 92, a lifelong resident of Columbus, died at 9:18 p.m. April 11, 2022, at Brown County Health and Living. Lorene was born October 16, 1929, in Waynesville, Indiana, the daughter of Walter Charles and Luella Irene Shaw Lain. She married John A Marshall on February 20, 1955. Lorene worked for the Evening Republican as a proofreader and remained employed with the local newspaper after it became the Republic serving as a proofreader, librarian, and executive assistant to the editor. She wrote a weekly column devoted to local citizens serving in the Armed Forces. She worked for the newspaper for 35 years. She and her husband John enjoyed spending time with their family and friends. During retirement, Lorene and John traveled extensively and celebrated their 50th anniversary with a trip to Hawaii. Lorene was a lifelong member of Bethel Baptist Church and she was a member of the church choir for many years. The funeral will be at 10:00 a.m. Saturday, April 16, 2022, at Jewell Rittman Family Funeral Home with Pastor Adam Carrigan officiating. Calling will be from 4:00 until 7:00 p.m. Friday, April 15, 2022, at the funeral home and one hour prior to the service date. Burial will be at Garland Brook. The family respectfully requests donations in lieu of flowers be made to the Susan G. Komen Breast Cancer Foundation and the Dementia Society of America. Survivors include son, Kenneth R. (Mindy Young) Marshall of Indianapolis; stepson, John (Sandy) Thomas Benson of The Villages, Florida; and grandchildren, Miranda Tempest of Seymour, and Aaron Gill of Columbus. She was preceded in death by her parents, Walter and Luella Lain; husband John A Marshall; daughter Rhonda Jo Meyer; brothers, Walter Charles Lain Jr. and William Dennis Lain. Services were entrusted to the Jewell-Rittman Family Funeral Home. You are invited to view the video tribute, light a virtual candle and send a message to the family via the funeral home website www.jewellrittman.com.

The family of Emma Lorene Marshall created this Life Tributes page to make it easy to share your memories.

Send flowers to the Marshall family.