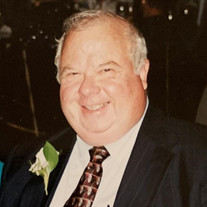 Elmer John Carl Whipker Jr., 77, of Columbus died at 2:15a.m. February 3, 2020, at Our Hospice of South Central Indiana Inpatient Facility. Elmer was born August 30, 1942, in Columbus, the son of Elmer John Carl Whipker Sr. and Goldie Beryl Talley Whipker. He married Kristina L. Mellott September 26, 1964; she preceded him in death January 31, 2011. He retired from Indiana Farm Bureau as an insurance agent after 35 years of service and had also served the community as a Bartholomew County Sheriff’s deputy. Elmer was very active in the 4-H community having served on the Bartholomew County Extension Board and received the Rural Urban Service Award in 2011. He had also held the office of president of the Tri-B Rabbit Club and was the Indiana State FFA Secretary in 1961 &1962. Elmer was also known as the county bee keeper in Bartholomew County for many years. He enjoyed going to local farmers markets and delivering produce for his brothers. He was one of three families that helped organize the Columbus East Booster Club. The funeral will be conducted at 10 a.m. Saturday, February 8, 2020, at Jewell-Rittman Family Funeral Home with the Rev. Martin Wright officiating. Calling will be 4-8 p.m. Friday and one hour prior to the service Saturday. Burial will be at New Harmony Cemetery. Memorials may be made to Our Hospice of South Central Indiana, Southwest Fire Department or Feathered Friends Poultry Club in honor of Elmer. Survivors include his son, Troy J. Whipker of Columbus and daughters, Katrina (Brian) Brumley of Columbus and Tricia L. (Kenny) Ritz of North Vernon; brothers, Alan (Karen) Whipker and Harry Whipker, both of Columbus; and grandchildren, Steven (Patricia) Ritz, Sierra (Evan Chaille) Ritz, Summer Ritz, Kyler (Lakan) Brumley and Halie Brumley, Alexa and Corbin Whipker and Mackenzie Eppley. He was preceded in death by his parents; brothers, Herschel, Halford, Perry Don, Paul, David and Bennie Whipker and sisters, Elizabeth McKinney and Margaret Volland.

The family of Elmer John Carl Whipker Jr. created this Life Tributes page to make it easy to share your memories.

Send flowers to the Whipker family.