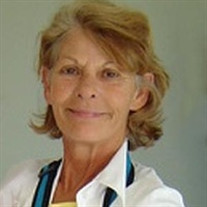 Elizabeth Ann "Libby" Miller, 75, of Columbus, died at 1:56 p.m. June 17, 2019, at Our Hospice of South Central Indiana Inpatient Facility. Libby was born April 29, 1944, in Cave City, Kentucky, the daughter of Lawrence and Mary Christine Franklin Graham.  She married Lawrence “Larry” Miller December 2, 1961. She was previously employed at Arvin Industries, Days Express, Walmart and Elder- Beerman. Everyone loved Libby and she was a loving wife, mother and grandmother. The funeral will be conducted at 1 p.m. Friday, June 21, 2019, at Jewell-Rittman Family Funeral Home with Brace Rutledge officiating. Calling will be 4 to 8 p.m. Thursday and one hour prior to the service.  Burial will be at Garland Brook Cemetery. Memorials may be made to Our Hospice of South Central Indiana. Survivors include her husband of 57 years, Lawrence "Larry" Miller; sons, Audie (Kristin) Miller of West Lafayette and Mark (Dana) Miller of Columbus; brothers, Ken (Arlene) Graham and Dale (Sharon) Graham, both of Columbus and Jeff Graham of Monterey, California; and grandchildren, Mason, Keenan, Asia, Marco and Ryan Miller. She was preceded in death by her parents; and brothers, Lawrence, William, Michael and Wayne Graham. You are invited to view her video tribute, light a virtual candle and send a message to the family via the internet.

The family of Elizabeth "Libby" Ann Miller created this Life Tributes page to make it easy to share your memories.