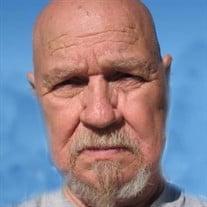 Ed Templeton of Columbus, Indiana passed away December 16th, 2020 at Columbus Regional Hospital. He was born the son of David C. Templeton and Iralean F. (Taylor) Templeton, on November 24th, 1936 in Yukon, West Virginia. Ed married Sharon (Arnholt) Templeton on July 5th, 1987 she survives. He proudly served his country in the U. S. Coast Guard. Ed was also a member of the 101st Airborne division during the years of 55-57 in Germany. Being a jack-of-all trades Ed was a self-taught, self-employed man of many talents. Ed was gifted from childhood with woodworking skills that benefited many family members. He enjoyed painting, and even made musical instruments such as dulcimers and a violin. Ed was a member of the American Legion Post 495 in Indianapolis. He was privileged to be in the color guard and many times presented colors at the Colts’ games. Ed will be greatly missed by all who knew and loved him. He is survived by his wife, Sharon Templeton of Columbus, IN; son, Mark Templeton of Indianapolis, and John C. Cannon, of Greenwood, Indiana; daughter, Tamara (Michael) Miller of Cincinnati, Ohio and Deborah (Ron) Williamson of Columbus, Indiana; brothers, David A. (Kasie) Templeton of Knoxville, Tennessee, John C. (Nikki) Templeton of Knoxville, Tennessee; sisters, Patricia (Bill) Sexton of Kingsport, Tennessee, Dorothy Spradlin of Nashville, Indiana, Shirley (Ron) Dillistone of Long Beach Mississippi, Rosalea Roberts of Glasgow, Kentucky; grandchildren, Joshua (Victoria) Kern of Cincinnati, Ohio, Natasha (John) Snyder of Bristol, Tennessee, Chelsea Williamson, Joseph P. Couch, and Brandon Ladd, all of Greenwood, Indiana, and 4 great-grandchildren. Ed was preceded in death by his parents, and a daughter, Gwendolyn Parton, a grandson, John Edward Cannon. Services were entrusted to Jewell ~ Rittman Family Funeral Home.

The family of Ed Templeton created this Life Tributes page to make it easy to share your memories.

Send flowers to the Templeton family.