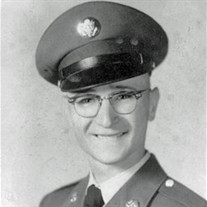 Earl D. "Dutch" Imel, 80, of Greensburg, died at 10:30 p.m. September 11, 2019, at Decatur County Hospital. Dutch was born July 13, 1939, in Madison, the son of Perry H. and Rosamae Imel. He married Judy L. Shook October 2, 1964. He grew up on a farm, but became a tool and die maker. He served in the U.S. Army for 2 years, and was stationed in Germany for 18 months. After he was discharged from active duty, Dutch served in the Army Reserves for 4 years. Dutch had worked for various companies and retired after 24 years from Hillenbrand Casket Company. He was an active member of Flintwood Wesleyan Church and lived for his family. Dutch enjoyed watching NASCAR, collecting NASCAR miniatures and woodworking. He especially enjoyed the time he had spent fishing in Canada. The funeral will be conducted at 10 a.m. Monday, September 16, 2019, at Flintwood Wesleyan Church with Pastor Wes Jones and Derick Carpenter officiating. Calling will be Sunday from 1 to 5 p.m. at the Jewell-Rittman Family Funeral Home and one hour prior to the service Monday, at the church. Interment will be at Rossburg Cemetery in Rossburg, Indiana. Memorials may be made to Flintwood Wesleyan Church Building Fund in honor of Dutch. Survivors include his wife, Judy; son, Christopher A. Imel of Ladoga, Indiana; brothers, Robert W. Imel and John Imel, both of Greensburg; a grandchild, Brittany Dyer of Greensburg; and a great-grandchild, Owen L. Paluch of Greensburg. He was preceded in death by his parents; brothers, Richard Imel, Charles Imel, William J. Imel and James Dennis Imel; and sisters, Tillie Mae Imel, Patsy Cowins, Peggy Gilland and Janie Simmons.

The family of Earl D. "Dutch" Imel created this Life Tributes page to make it easy to share your memories.

Send flowers to the Imel family.