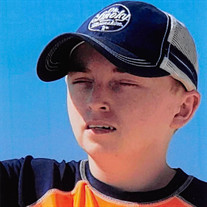 Dustin L. Carmer, 23, of Columbus, died at 5:30 p.m. September 14, 2019, at I.U. Health Methodist Hospital in Indianapolis. Dustin was born December 10, 1995, in Columbus, the son of Dorance Carmer and Cheryl Artis Carmer. He enjoyed watching the Chicago Cubs baseball team and playing Playstation with Jared, Brayden, Jayden, Addison and Phillip. He was a member of Horseman’s Camp Christian Outreach and loved his four-legged friends, Odie his dog and ponies, Flash and Daisy. The funeral will be conducted at 1 p.m. Friday, September 20, 2019, at Jewell-Rittman Family Funeral Home with Pastors Dean Manuel and Mark Hammell officiating. Calling will be 4 to 8 p.m. Thursday and one hour prior to the service Friday. Interment will follow at Springer Cemetery. Memorials may be made to Horseman's Camp Christian Outreach (HCCO) in honor of Dustin. Survivors include his mother and father, Cheryl (Greg) Hall of Columbus and father and stepmother, Dorance (Tessa) Carmer of Louisville; brothers, Daniel (Megan) Carmer and Dylan Carmer, both of Columbus and sisters, Mackenzie Carmer of Louisville, Amy (Jamie) Howe of Columbus, Melissa Spicer of Austin and Summer (Brinley) Nicholson of Crothersville; grandparents, Larry and Linda Carmer of Louisville and Richard and Joyce Artis of North Vernon; and great-grandmother, Fern Romine of Columbus. He was preceded in death by his grandmother, Jeanne Artis.

The family of Dustin L. Carmer created this Life Tributes page to make it easy to share your memories.

Send flowers to the Carmer family.