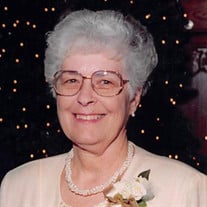 Doris “Kay” Bridgewater, 89, died Monday April 5, 2021 at home. She was born April 21, 1931 in Crothersville, Indiana to the late Clarence and Mary (Miner) Monroe. She married Edwin Bridgewater on October 13, 1951 and he survives. Doris was an active member of the East Columbus United Methodist Church where she was involved with the United Methodist Women, Mary’s Circle, Women’s Missions, Bible School and Bible Study. She also served many years with the Girl Scouts. She was a graduate of Crothersville High School with the class of 1949 and Doris later became a housewife and stay at home mother. Doris’ hobbies were spending time with friends and family and she loved knitting and ceramics. Survivors include her husband, Edwin; children, Brad Bridgewater of Forest Grove, Oregon, Bruce Bridgewater of Deputy, Indiana and Elizabeth (Joseph) Corya of Elizabethtown, Indiana; brothers, Lawrence (Vera) Monroe of Seymour, Indiana and Robert (Shirley) Monroe of Columbus; sister, Karen (Gary) McDonald of Seymour; grandchildren, Kimberly Bridgewater, Alexis Bridgewater, Kristen Bridgewater, Quinn Bridgewater, Justine (Hunter) Brown, Jacob Corya and Jared Corya. Funeral services will be held at 11:00 a.m. Monday April 12, 2021 in Jewell-Rittman Family Funeral Home with Pastor Ann Thomas officiating. Following the service, a private family burial will be held in the Pigeon Roost Cemetery south of Scottsburg. Friends and family may call from 9:00 a.m. until 11:00 a.m. Monday at the funeral home. In lieu of flowers, donations may be made to the East Columbus United Methodist Church or Our Hospice of South Central Indiana. You are invited to view her memorial tribute video, light a virtual candle and send a message of condolence to the Bridgewater family via the funeral home website: www.jewellrittman.com.

The family of Doris K. Bridgewater created this Life Tributes page to make it easy to share your memories.

Send flowers to the Bridgewater family.