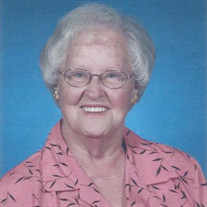 Donna Newton, 90, of New Carlisle, Indiana, died Wednesday, July 21, 2021 at Center for Hospice Care, Mishawaka. She was founder and first editor of the Scottie Sampler, a quarterly publication which served as a guide to collecting Scottie dog memorabilia. When she retired in 1996, the subscription numbered 1100 with many outside the United States. In addition to the publication, she and her late husband James Newton established Wee Scots, a fellowship for Scottie dog collectors. They presented annual collector’s shows and area meetings across the United States. These were sponsored by the Newton’s home-based business, Wee Scots, Inc. In 1988 Donna wrote and self-published Scottie Showcase, the first book on Scottie dog collectibles. In 2008 she authored another book, My Scottie Camelot, a historical review of the Scottie Sampler from 1983 through 2005. Arrangements are being handled by Jewell-Rittman Family Funeral Home on 25th Street. There will be no calling hours. Burial will be private at Garland Brook Cemetery. Online condolences may be sent to the family at www.jewellrittman.com Memorial contributions my be sent to the Bartholomew County Humane Society. Mrs. Newton was born April 19, 1931 in Beech Grove, Indiana. She was the daughter of Wilna and Edward Kornbroke. She was a graduate of Southport High School. She married James L. Newton on April 17, 1954 at the Chapel in the Woods at NAS, Norfolk, Virginia. Survivors include daughters Michele (Gary) Hansford, Carthage, Missouri and Kay Newton, Mishawaka, Indiana. Grandchildren, Ryan (Stacie) Schultz, Marathon, Wisconsin; Christopher (Raen) Levendoski, Mishawaka, Indiana; and Angela Levendoski (Justin Tucker), Minneapolis, Minnesota. Great grandchildren are Paige, Dane and Dominick Schultz, Marathon, Wisconsin; Ian Levendoski, and Rion Gendron, Mishawaka, Indiana. Mrs. Newton, formerly of Indianapolis, moved to Columbus in 1974. Prior to that time she was employed with the Indianapolis Pubic Schools. While living in Columbus she was employed at Developmental Services, Inc., Cummins Engine Company, and Not Just Popcorn in Edinburgh. Donna was a 70-year member of the Order of Eastern Star. In recent years she was a member of Columbus Chapter #339. She was a member of Sandy Hook United Methodist Church. In 1952 for a brief time she was a Seaman Recruit in the U.S. Navy stationed at Bainbridge, Maryland. An avid basketball fan, Mrs. Newton at one time had an extensive Larry Bird memorabilia collection. Her favorite basketball teams were Indiana University, Butler University and Indiana Pacers. She also enjoyed Indy and Nascar racing. Other hobbies included owning Scottish terriers, writing, scrapbooking, and the Red Hat Society. She was preceded in death by her parents and husband, James L. Newton.

Donna Newton, 90, of New Carlisle, Indiana, died Wednesday, July 21, 2021 at Center for Hospice Care, Mishawaka. She was founder and first editor of the Scottie Sampler, a quarterly publication which served as a guide to collecting Scottie... View Obituary & Service Information

The family of Donna J. Newton created this Life Tributes page to make it easy to share your memories.

Send flowers to the Newton family.