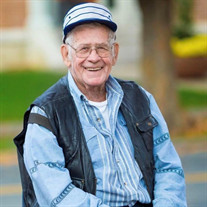 Donald C. Clark, 88, of Columbus, passed away June 6, 2020, at his home. Don was born September 28, 1931, in Seymour, the son of Amel and Mabel Clark. He married Marilyn Sullivan on May 28, 1978. Don retired from Cummins Engine Company in 1995 after 39 years of service. He enjoyed farming, camping, and loved going on vacation to Missouri with his wife and their horses. He is survived by his wife Marilyn, whom he shared 42 wonderful years together; sons, Timothy Clark of Columbus, Doug (Shelly) Ness of Big Piney, Wyoming, David (Debra) Ness of Columbus, and Michael (Nikolette) Clark of Columbus; daughters, Barbara Brewer of Florida, Yvonne Clark Spilker of Columbus, Julie (Rod) Godfrey of Merritt Island, Florida, and Michelle (Eric) Banister of Whiteland; many grandchildren and great-grandchildren; brothers, Bob (Rose) Clark of Columbus, Francis Clark of Seymour, and Richard Dale Clark of Columbus; as well as a sister, Dotti Burkhart of Seymour. Don was preceded in death by his parents; a son, Charles Clark; brothers, Harold, Oliver, Ray, and Jim Clark; as well as sisters, Ruth Bauer, Edith Pfaffenberger and an infant sister. A Celebration of Life Service will be at David and Debra Ness’s residence, 8008 W. 300 S., Columbus, IN, from 2 to 5 p.m. Sunday, June 14, 2020. Memorial contributions may be made to Our Hospice of South Central Indiana.

The family of Donald C. Clark created this Life Tributes page to make it easy to share your memories.

Send flowers to the Clark family.