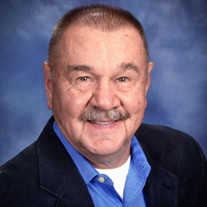 Richard “Dick” Paige Gaynor II, 78, of Columbus, passed peacefully at home, after a short battle with cancer at 12:25 a.m., July 11, 2021, at his home. Dick was born November 8, 1942 in Canton, Ohio, the son of Richard Paige Gaynor and Mary (Coutes) Gaynor. He moved to Chicago in 1961 where he met and married Noreen Ann (Belzer) Gaynor on August 31, 1963. Dick and Noreen lived in Chicago, Illinois until 2002 when they moved to Columbus, Indiana. He worked for Siemans in Buffalo Grove, Illinois for many years and ran a successful computer consulting business, Gaynor and Associates. While living in Chicago he earned his first degree from DeVry Tech in Electrical Engineering. Dick was a member of First Lutheran Church where he enjoyed playing his guitar during service. Dick was very involved in the Columbus community, serving on the Columbus Planning Commission from 2008 until 2013 and the Bakalar Airport Board of Commissioners from 2009 until 2021. Dick was involved in the Experimental Aircraft Association. (EAA) and the local EAA Chapter 72. He served as the chapter president for 8 years and was very involved in the EAA’s Young Eagles Flight program. Dick received his second degree from Ivy Tech Community College in Visual Communications. Dick’s passions in life were his family, teaching, aviation and photography. Dick was nominated by students and awarded Teacher of the Year by Ivy Tech Community College for the 2019-2020 school year, where he served as a professor in photography and aviation until the time of his passing. Dick was very proud to have successfully completed 6 IronMan World Championships in Kona, Hawaii. Today, we have lost a man of many talents. Dick will be greatly missed by all friends, colleagues, neighbors and his loving family. A memorial service will be at 11:00 a.m. on July 24, 2021 at First Lutheran Church located at 3600 25th Street Columbus, Indiana with Pastor Larry Isbell officiating. Visitation will be from 10:00 a.m. until 11:00 a.m. at the church on Saturday, July 24, 2021. Memorials may be made to the American Cancer Society, the Experimental Aircraft Association – EEA Chapter 729, or Our Hospice of South Central Indiana. Survivors include his wife, Noreen; a son, Richard Paige (Sherri) Gaynor III, of LaFollette, TN; a daughter, Loreen (Darren) Bryant, Marietta, GA; a brother, Jeffrey (Cindy) Gaynor, of Ravenna, Ohio; a sister, Gloria Gaynor, of Evansville, Indiana; grandchildren, Karina (Talon) Foulker, Garden Prairie, IL., Kevin Figlewicz, Dallas, TX., Matthew Figlewicz, of Acworth, GA., Garrett Cobley, Wheaton, IL., Great-grandchildren, Zane Schneider, Eleanor Foulker and Daxon Foulker, all of Garden Prairie, Illinois; several nieces and nephews and his devoted dog, Waltzing Matilda, “Mattie.” He was preceded in death by his parents and a great-grandson. Services were entrusted to the Jewell-Rittman Family Funeral Home. You are invited to view his video tribute and light a virtual candle and send a message to the family via the funeral home website www.jewellrittman.com.

The family of Dick Gaynor created this Life Tributes page to make it easy to share your memories.

Send flowers to the Gaynor family.