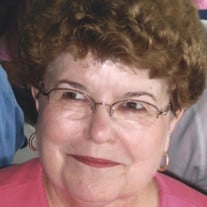 Diana M. Matz, 83, of Columbus, passed away Wednesday, April 1, 2020, at the Brown County Health and Living Community. She was born on June 1, 1936, in North Vernon to Roland M. and Frances E. Platter Webster. She married Charles W. Matz on August 6, 1955. Diana graduated from North Vernon High School in 1954. She was a long time resident of Columbus and was a stay at home mom, eventually going to work for Maintenance Electrical Rep. Co. Inc. As a member of East Columbus Christian Church, she was involved in many activities. She had been a member of the Missions Committee, Naomi Circle, Nomad Class, small group, and prayer group. Diana was a volunteer for several years with Book Buddies program and Columbus Regional Hospital Auxiliary. She was very active with the Republican Party, serving as a precinct committeeman and vice-committeeman for many years. She enjoyed playing cards, board games and traveling. Diana was a fan of the Indianapolis Colts and I.U. football and basketball along with Navy football. Diana was an active grandmother, attending many activities involving her grandsons. She was most happy when she was with her grandsons, and her family and friends. A private graveside service will be held at Vernon Cemetery. Memorial donations can be made to Wounded Warriors or East Columbus Christian Church. She is survived by her daughters, Deborah L. (Robert) Matz Bowers of Nashville, Julie E. (Gregory) Oates of Spring Hill, Tennessee and Janet S. Law of Columbus; grandchildren, Kyle M. Littell of Columbus, Joshua D. (Dr. Rachel) Oates of Franklin, Tennessee, Dr. Ethan T. (Elizabeth Willmann) Oates of Indianapolis, Seth C. Law of Southport; and two great-granddaughters. She is also survived by a stepsister, Sue Lauth of Findley, Ohio, and a stepbrother, John R. Davis of Shelbyville, Kentucky. She was preceded in death by two brothers; her parents, Roland Webster and Frances Davis; grandparents; stepfather, Cy E. Davis; and her beloved dog, Reggie.

Diana M. Matz, 83, of Columbus, passed away Wednesday, April 1, 2020, at the Brown County Health and Living Community. She was born on June 1, 1936, in North Vernon to Roland M. and Frances E. Platter Webster. She married Charles W. Matz on... View Obituary & Service Information

The family of Diana W. Matz created this Life Tributes page to make it easy to share your memories.

Send flowers to the Matz family.