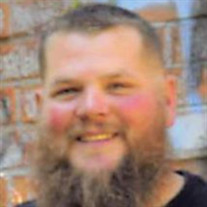 Derek William Redmon, 33, of Columbus, passed away Friday, January 21, 2022. Derek was born in Fayetteville, NC to Charles Redmon and Tammey Dowden Redmon. He married Cayce Cheryle Sampson on January 22, 2018. Derek loved his country, he served as an Army Sergeant in the United States infantry. He was a fulltime fireman when he lived in North Carolina with the Spring Lake Fire Department. He was currently a crane operator at 31 Diesel Truck and Wrecker Service Inc. Derek was very adventurous, he loved hunting, fishing, golfing, traveling and spending time with his family, most of all with his three children. Funeral services will be at 1 p.m. Friday, January 28, 2022 at Jewell-Rittman Family Funeral Home. Calling will be from 4 p.m. – 8 p.m. Thursday at the funeral home and one hour prior to the service on Friday. Derek will be laid to rest at the New Harmony Cemetery. Survivors include his wife, Cayce Redmon; a son, Brhylin Redmon of Columbus, IN; daughters, Farrah Redmon and Parker Fischvogt both of Columbus, IN; aunt and uncle, Ron and Teresa Arnholt; grandfather, Raymond Dowden; grandmother, Charlotte Thornhill; father, Charles Redmon; mother, Tammey Priddy and 5 brothers and 4 sisters. He was preceded in death by his grandfather, Bruce Redmon.

The family of Derek William Redmon created this Life Tributes page to make it easy to share your memories.

Send flowers to the Redmon family.