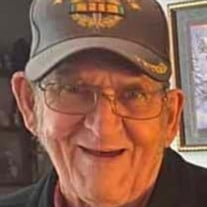 Delbert Lee, 79, of Columbus, passed away Sunday, November 21, 2021 at Columbus Regional Hospital Emergency Room. He was born in Leitchfield, KY on August 16, 1942 to Paul James Lee and Irene Blair Lee. He married Marjorie Pike Lee and she preceded him in death. He married Peggy Anderson and she survives. Delbert was a proud Army veteran serving in Vietnam. He was previously employed at Golden Foundry and retired from Arvin Industries. Several years ago, he owned his own business, Diamond Roofing Company. He enjoyed hunting, fishing, woodworking, driving race cars, riding horses and going out to eat. He loved walking and appreciated being in nature. He was a member of Columbus General Baptist Church. Funeral services will be at 10:30 Monday, November 29, 2021 at Jewell-Rittman Family Funeral Home with Rev. Jessie Stephens officiating. Calling will be from 1 p.m. – 5 p.m. Sunday at the funeral home and one hour prior to the service on Monday. Burial will be held at Garland Brook Cemetery with military honors by the Bartholomew County Veterans Honor Guard. Memorial contributions may be made to Disabled American Veterans and Wounded Warrior Project. Delbert is survived by his wife, Peggy Lee; a son, Ronald Dean Lee of Seymour, IN; daughters, Christy Lee and Dee-Dee Irene Lee both of Florida; step-children, Regina (Richard) Burton, Melissa Pedigo and LaShaunda (Scott) Brown all of Columbus, IN; brothers, Donald Ray Lee, Frank Lee, Jerry (Toni) Lee all of Columbus, IN and Paul (Charlotte) Lee of Tennessee; a sister, Wilma (David) Leonard of Columbus, IN; several grandchildren, step-grandchildren and Several great-grandchildren. Delbert was preceded in death by his parents; first wife, Marjorie Lee; sons, James Delbert Lee and Rickie Lee; brothers, Tommy Lee, Charles Lee, Jessie Lee and a sister, Glenda DeLaney.

The family of Delbert Lee created this Life Tributes page to make it easy to share your memories.