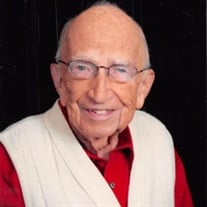 Dean B. Horn passed away on Tuesday, May the 14th, at his home, at the age of 97. He was born November 16, 1921, to Frank and Lena Horn in Columbus, Indiana. He married Norma Darnell in 1960, and after being his wife for 49 years, she passed away in 2009. He was a devoted husband to Norma. He was a member of the Westside Community Church. Dean was an avid fisherman and hunter, making numerous trips to South Dakota and Nebraska to pheasant hunt. He loved most of all deer hunting and turkey hunting. He also loved to mushroom hunt. When it came to food, he was a connoisseur and accomplished cook of wild game meat that he hunted. He spearheaded upon several occasions a fish program at Harrison Lake to bring the fish population in balance. He started his working career with Cummins in the accounting department and later opened a small radio repair shop behind his residence on 16th and California streets in 1948. The business grew quickly to selling radios and television sets. It is thought that he may have sold the first television set in Bartholomew County. In 1954 he expanded the business and built a new building from the ground up on 16th and California. In 1955 he introduced color television and was known for having coffee and donuts of an evening in the store for customers to view color television for the first time. In 1957 he started selling a full line of appliances along with color television and stereos. In 1965 he moved his entire operation to Columbus Center. Over the years he received numerous awards from RCA, National Association of Appliance-TV Dealers (Narda) and Whirlpool. He sold the appliance and television business in 1971. Along the way, he also operated a successful houseboat rental business at Monroe Reservoir, Fourwinds Marina, and later moved that operation to Brookville Reservoir. In the height of his boat rental business he managed as many as 15 houseboats, jet skis, pontoon boats and ski boats. While he loved being around water his entire life, interestingly he never learned to swim.After his full retirement, he appeared on several Purdue football television commercials. He enjoyed this as much as anything he had done in his life previously. The funeral will be at noon, Saturday, May 25, 2019, at Jewell-Rittman Family Funeral Home with the Rev. Mary W. Cartwright officiating. Calling will be from 10 a.m. until time of service Saturday. Burial will follow at the City Cemetery. Memorial donations may be made to Our Hospice of South Central Indiana or the Westside Community Church. He was preceded in death by a sister, Leta Chinn; his parents; aunts, Neva Singleton (Earl), Emma Gressel (Simon) and Margaret Horn; a nephew, Ronnie Bozell; and a stepson, Wesley Darnell. He is survived by a daughter, Judy Zebell (Dennis) and a son, Jerry Horn, both of Columbus; and a stepdaughter, Rebecca Darnell of Logansport; a niece, Marilyn Bozell; and a nephew, Darryl Bozell. You are invited to view his video tribute, light a virtual candle and send a message to the family via the internet. Information: www.jewellrittman.com.

Dean B. Horn passed away on Tuesday, May the 14th, at his home, at the age of 97. He was born November 16, 1921, to Frank and Lena Horn in Columbus, Indiana. He married Norma Darnell in 1960, and after being his wife for 49 years, she passed... View Obituary & Service Information

The family of Dean B. Horn created this Life Tributes page to make it easy to share your memories.

Send flowers to the Horn family.