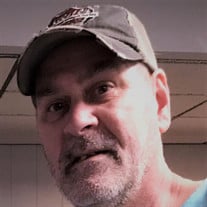 David L. York, 63, of Columbus, passed away at 12:47 p.m. Monday, September 13, 2021 at Columbus Regional Hospital. Dave was born on September 1, 1958 in Columbus to John S. York and Dimple Huffines York. He married Karen Griffin on December 14, 1992. Dave graduated from Columbus East High School in 1976. He was previously employed at Dolly Madison until they closed after 25-plus years and was currently employed at PMG Indiana, LLC since 2012. Dave was an avid bowler for many years and was inducted in the Halls of Fame in Columbus and St. Louis. He was also a racing enthusiast. Funeral services will be at 4 p.m. Saturday, September 18, 2021 at Jewell-Rittman Family Funeral Home with Pastor Larry Duncan officiating. Calling will be from 1 p.m. until service time on Saturday. In lieu of flowers, memorial contributions may be made to Columbus Bowling Center, in care of the junior bowling league. Survivors include his wife, Karen York; nieces and nephews, Johnny O. York, Jr., Crystal (Ricky Cox) York, Micheal (Stacy) York, Laci Green and Sean A. Matney all of Columbus; father-in-law, Henry Griffin, Jr. of Columbus; sisters-in-law, Amy York of Columbus, Connie Wade of Michigan, Cathy Kelly of Columbus and brother-in-law, Kevin Newsom of Edinburgh; 6 great nieces and nephews. Dave was preceded in death by his parents, a brother, John O. York Sr., a sister, Betty (Paul) Hamilton; mother-in-law, Lucille F. Newsom; brothers-in-law Randall Griffin and Keith Newsom.

The family of David L. York created this Life Tributes page to make it easy to share your memories.

Send flowers to the York family.