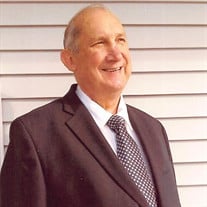 Columbus Danny Franklin Wright, 78, of Columbus, died at 10:40 a.m., Tuesday, February 8, 2022, at Our Hospice. Danny was born April 12, 1943 in Thornton, Kentucky, the son of Harvey G. and Cora Potter Clark. Danny attended Whitesburg High School in Letcher County Kentucky. Danny played football in high school and his coach nicknamed him Shanks. Danny attended the Walker Chapel Church in Rosstown, IN. He was formerly employed with Reeves Pulley, and later worked at Arvins and GECOM for 13 years. He was a Kentucky Colonel and a huge Wildcats Fan. He enjoyed watching UK basketball and NASCAR. Danny touched the lives of many people. He will be greatly missed by all who knew and loved him. The funeral will be at 10:00 a.m. Tuesday, February 15, 2022 at Jewell-Rittman Family Funeral Home with the Gary Bradley officiating. Calling will be Monday, February 14, 2022 from 4:00 p.m. until 8:00 p.m. and one hour prior to the service on Tuesday. Burial will be at Garland Brook Cemetery. Memorials may be made to the St. Jude’s Children’s Hospital, Riley Children’s Hospital or the Shriner’s Hospital. To view Live Streaming of the service please go to www.jewellrittman.com on the morning of the service. Survivors include his wife, Geraldine; a former spouse, Sharon Wright; and his only child, Greg (Kristy) Wright of Greenwood, IN; a father figure to daughter, Vickie (Brent) Rose of Columbus, IN; sons, Rick Ozbun of Columbus, IN; Roger (Bellaly) Ozbun of Columbus, IN; a sister, Carol (Aaron) Cain of Columbus, IN; grandchildren, Daniela and Trevor Wright, along with numerous other grandchildren and great grandchildren and nieces and nephews. He was preceded in death by his parents, a former spouse, Delores Ozbun and brothers, Harvey Wright and Doug Wright. Services were entrusted to the Jewell-Rittman Family Funeral Home. Jewell – Rittman Family Funeral Home would like to thank everyone in advanced for wearing masks and practicing social distancing while attending gatherings. You are invited to light a virtual candle and send a message to the family via the internet. www.jewellrittman.com

The family of Danny Franklin Wright created this Life Tributes page to make it easy to share your memories.

Send flowers to the Wright family.