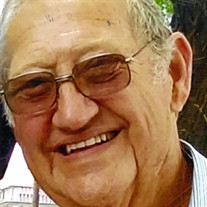 Daniel D. Hagemier, 83, of Edinburgh, passed away at 6:52 a.m. Tuesday July 13, 2021 surrounded by his loving family. He was born February 17, 1938 in Lawrence County, Indiana to the late Earl Richard and Helen Beatrice (Beasley) Hagemier. Daniel is survived by his wife, Carolyn Wesley Hagemier, whom he married July 26, 1980. Dan was a graduate of Huron High School, was the owner/operator of Hagemier Products, and formerly retired from Golden Foundry. He was an avid fisherman, learning how to be a “bass master” from his father Earl, and later passed those same skills to his children and grandchildren. He was known for catching buckets of bluegill, later fried that evening by Carolyn. Dan was known for his fierce honesty, keen integrity, and never-bending dedication to “doing what’s right, even when it’s hard, and especially when it’s hard.” He was a servant of Christ and a member of Jewell Village Separate Baptist Church. He was devoted to reading and studying the Bible. He enjoyed singing and playing southern country, bluegrass, and gospel music. He played the guitar, bass, dobro, and any other instrument you put in his hands. You could hear him singing and playing on any day that ended in “Y” in venues across the United States. He was a man of prayer, family, and laughter. Dan loved his family and visiting with his children, grandchildren and great grandchildren. He and Carolyn enjoyed their second home in Florida during the winter months where he fished, explored, and played in church groups. In his spare time, you would find him in the garage restoring Model As, Mustangs, and anything else that moved. Funeral services to celebrate Daniel’s life will be held at 1:00 p.m. Saturday July 17, 2021 at Jewell-Rittman Family Funeral Home with the Rev. Eddie Freeman officiating. Following the service, Daniel will be laid to rest in Garland Brook Cemetery. Friends and family are invited for a time of visitation starting at 11:00 a.m. Saturday until the service time at the funeral home. Memorial contributions may be made to Our Hospice of South Central Indiana. Daniel is survived by his wife and children, Terry Dean (Penny) Hagemier of Hope, Tami J. (Chris Lanthier) Hagemier of Madison, Kristi L. (Dennis) Rose of Columbus and step-children, Marlin (Denise) Brown of Franklin; and Marilyn J. Luttrell of Fairfield, Ohio; sister, Sandy (Rick) Triplett of Paoli; grandchildren, Nichole (Eric) Rose-Freeman, Tanner Dean (Courtney) Hagemier, Bryor Brown and Nikki J. Luttrell and great grandchildren, Jaxton Hagemier, Liam Hagemier, Mason Hagemier, Carson Freeman and Joanna Freeman. Daniel is preceded in death by his brothers, Jerrell Hagemier and Harold Hagemier and sister, Juanita Hagemier. You are invited to view his video tribute, light a virtual candle of remembrance and send messages or special memories to the Hagemier family via the funeral home website: www.jewellrittman.com

The family of Daniel D. Hagemier created this Life Tributes page to make it easy to share your memories.

Send flowers to the Hagemier family.