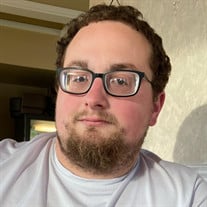 Dakota Jordan Lee Isley, 23, of Columbus died on Wednesday, April 27, 2022. He was born on May 8, 1998 to Howard Lee Isley, and Pepper Elaine Robertson. He married his beloved bride, Laura Ellen Wilson Isley, on November 17, 2018. Dakota struggled with Epilepsy, since his diagnosis at 17, that ultimately took his life. Dakota was a man of God. He attended both Rivers of Living Waters Church, and Covenant Family Worship Church. During his free time he enjoyed playing video games, and participating in sports. He was very competitive and was on the Varsity Baseball Team at Brown County High School. His greatest loves were his wife and children. He is survived by his wife, his parents, his stepmother, Arnettie Sue Robertson; his children, Kayden Joseph Lee Isley, and Esther Mayleigh Isley; his brothers, Chad Lee Isley, of Franklin; Charles Dewayne Jeffrey Isley, of Brown County; his sister, Summer Dawn Isley, of Edinburgh, and Kendra Alexis Lee Isley, of Brown County; his grandfather, Kenneth Alan Haywood, of Brown County; his great-grandmother, Judith Ann Abbott, of Brown County; and many nieces, nephews, cousins, aunts, and uncles. Services will be at 1:00 pm on Thursday, May 5th at Jewell-Rittman Family Funeral Home with Pastor Dennis Collins officiating. Calling hours will be from 10:00 am until time of service. Burial will be at Garland Brook Cemetery. Friends and family may make memorial contributions to the funeral to assist with Dakota’s funeral. You are invited to view his video tribute, light a virtual candle and send a message to the family via the funeral home website, www.jewellrittman.com.

The family of Dakota Jordan Lee Isley created this Life Tributes page to make it easy to share your memories.

Send flowers to the Isley family.