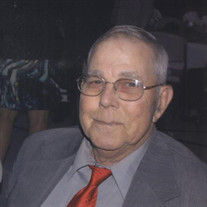 Clarence Albert “Shorty” Fiesbeck Jr. of Columbus, Indiana passed away at 1:35 a.m. on Friday, July 24, 2020 at Our Hospice of South Central Indiana Inpatient Facility. Clarence was born on September 9, 1931 in Columbus, Indiana, the son of Clarence and Blanche Sparks Fiesbeck. Clarence married Jean Sims on June 10, 1951, she survives. Clarence has always lived on the family farm. When he was younger and short, his twin brothers grabbed his arms when they were running to catch the bus and said, “come on shorty”. That name has stuck all through the years although he grew to be 6’2”. He was a kind and caring man, helping anyone he could. He even took in a home-less man giving him a place to stay, a car and a job. Shorty was a farmer all his life but any extra time was spent as an Oliver tractor mechanic and selling PAG seed corn. He was on the Bartholomew County Fair Board and also on the REMC Board of Directors. Shorty enjoyed coon hunting, fishing, taking care of his fruit trees and honey beekeeping. Survivors include his wife; children, Jan (Robert) Shireman, Pam Jordan both Decatur County and Jay (Jordea) Fiesbeck of Columbus; grandchildren, Amy (Scott) Best, Tammy, Craig and Kyle (Sara) Shireman of Decatur County, Chris (Erica) Jordan of Hope, Indiana and Matt (Janette) Jordan of Columbus; great grandchildren, Breanna (Kyle) Conwell, Taylor and Kiley Best, Alivia and Kole Jordan, Garrett Hamilton, Evan, Elaina, Lyndsey and Carter Shireman; a great great grandchild, Emi Conwell. He is also survived by one sister, Etta Faye (Guy) Hudson. He was preceded in death by his parents; three brothers, Don, Dean and Bill and a sister, Margaret Fiesbeck. Due to the Covid 19 Virus, a private family service will be held on the family farm. In lieu of flowers, memorial contributions may be made to Petersville United Methodist Church or Our Hospice of South Central Indiana.

The family of Clarence Albert "Shorty" Fiesbeck Jr. created this Life Tributes page to make it easy to share your memories.

Send flowers to the Fiesbeck family.