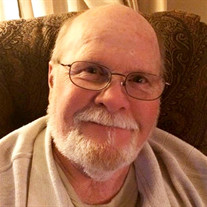 Charlie L. Hollenbeck, 77, of River Birch Drive, died at 10:48 a.m. December 5, 2019, at Our Hospice of South Central Indiana Inpatient Facility. Charlie was born October 15, 1942, in Columbus, the son of Charles L. and Hazel Waltermeier Hollenbeck. He married Donna J. Johnson January 29, 1983. He retired from Cummins Engine Company in 2008 after 40 years of service. Charlie was an avid NASCAR fan and enjoyed working on his truck and working in his yard. Charlie was a man who had many friends throughout the years. He was a loving husband, father, grandfather, and had a special love for his dog Milo. The funeral will be conducted at 7 p.m. Tuesday, December 10, 2019, at Jewell-Rittman Family Funeral Home with Pastor Mark Myers officiating. Calling will be 4 p.m. until the time of service Tuesday. Memorials may be made to Our Hospice of South Central Indiana in honor of Charlie. Survivors include his wife, Donna; sons, Michael Allen (Missy) Hollenbeck of Nineveh, Mark Andrew (Missy) Hollenbeck of Columbus and stepson, Joshua L. Lynch and a daughter, Jessica R. (John) Anderson of Hartsville; grandchildren, Logan Hollenbeck, Dalton Hollenbeck, Sierra Hollenbeck, Riley Hollenbeck, Nick Hollenbeck, Kylee Hollenbeck, Ethan Lee, Madeline Anderson, and Baylee Lynch; and several great-grandchildren. He was preceded in death by his parents and a sister, Betty Jean Heath.

The family of Charlie L. Hollenbeck created this Life Tributes page to make it easy to share your memories.

Send flowers to the Hollenbeck family.