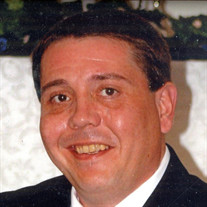 Charles W. “Chuck” Sherfick, Jr, 49, of Columbus, passed away at 6:33 p.m. Wednesday at Columbus Regional Hospital. He was born July 27, 1971 in Columbus to Charles W. Sherfick, Sr. and Ruby (Ferrenburg) Sherfick and has been a lifelong Columbus resident. Chuck graduated from Columbus East High School in 1989. He was a member of the Ogilville Christian Church. He was a fun loving character that loved his children, family and friends. He had been a volunteer with the Southwest Fire and Rescue as a volunteer fireman, a first responder and an EMT. Chuck received firefighter of the year in 1999. He loved softball and had played on many teams over the years. Chuck had a generous helping heart and was always thinking of others first. He was always ready to lend a helping hand. Chuck worked at Enkei, Hardigg Industries, LNP Engineering, Dolly Madison Bakery, Sunright America and other local factories as a mechanical maintenance engineer. Funeral services will be held at 2:00 p.m. Monday at Jewell-Rittman Family Funeral Home with Marty Wright officiating. Visitation will begin at Noon Monday at the funeral home. Due to the state mandate limiting gatherings to 50 people, visitors are required to wear face masks and maintain social distancing. We encourage you to share your support with the family, being cognizant that others wish to do the same. You may be asked to wait outside the building as we comply with this mandate. Chuck’s funeral service will be live streamed on the funeral home website beginning at 2:00 p.m. Monday at: www.jewellrittman.com. Memorial donations may be made to the funeral home in Chuck's memory to help with funeral expenses. Chuck is survived by his fiancé, Amberly Franklin of Columbus; his children, Jessica (Hunter Larrison) Sherfick and Joshua Sherfick; his mother, Ruby Sherfick of Columbus; his brothers, Mike (Sharron) Sherfick of Seattle,WA and James E. Hill of Columbus; his sisters, Linda (Kenny) Crawford of New York and Juanita (Shawn) Johns of Columbus and the mother of his children, Angie Lockherd Sherfick of Columbus. Chuck is also survived by several nieces and nephews. He was preceded in death by is father Charles Sherfick, Sr. sister-in-law, Pamela Hill, grandparents, and several aunts and uncles. You are invited to view his memorial tribute video, sign the guestbook and send a message of condolence to the Sherfick family via the funeral home website: www.jewerittman.com.

The family of Charles W. "Chuck" Sherfick Jr. created this Life Tributes page to make it easy to share your memories.

Send flowers to the Sherfick family.