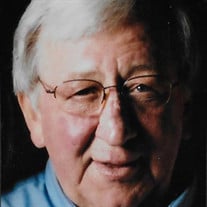 Charles Jerome Budd, 78, of Columbus, Indiana, passed away on Sunday, September 27, 2020 at his home. Charles, “Charley”, was born on July 14, 1942 in Muncie, Indiana, the son of Charles and Kathryn Budd. He had three siblings, David (survives), Phyllis and Mary Jane Budd. Charley graduated from the University of Kentucky where he studied architecture. He was a registered Architect for more than 40 years. Charley loved architecture, art and design. After his graduation, Charley was drafted into the U.S. Army for service during the Vietnam War. He served as an architect for the Headquarters Commandant at Fort Leavenworth, Kansas from 1967-1969. Charley was a private man who loved books, collecting, fishing and fine food. He was very generous with his time and talents, always willing to help his daughters with a house project. His greatest pleasure was spending time with his grandchildren, Harrison, Grant and Siena, with whom he shared his love of fishing and collecting. Charley is survived by his daughters, Amy Lynn and Charlie Baxter of Worthington, Ohio and Kathryn Elizabeth and Dominic Glover of Columbus, his grandchildren Harrison Baxter, Grant Baxter and Siena Glover, and his former wife and dearest friend Linda Becker. In keeping with his wishes, cremation is planned. No funeral service or visitation will be conducted. Jewell-Rittman Family Funeral Home is assisting the family with these requests.

The family of Charles Jerome Budd created this Life Tributes page to make it easy to share your memories.

Charles Jerome Budd, 78, of Columbus, Indiana, passed away on...

Send flowers to the Budd family.