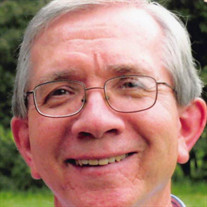 Charles Richard “Dick” Brooks, 78, of Columbus, passed away on Friday, February 4, 2022 at his home. Dick was born in Aurora, IN on March 16, 1943 to Charles Brooks and Mildred Yorn Brooks. He married JoAnn Stuehrenberg on April 4, 1964. Dick was a member of St. Bartholomew Catholic Church. He retired from Arvin Industries after 38 years of service. He enjoyed traveling, water skiing, camping, crossword puzzles, square dancing and line dancing. Mass of Christian Burial will be held at 11:30 a.m. Thursday, February 10, 2022 at St. Bartholomew Catholic Church. Calling will be from 10:30 a.m. Thursday until service time. Burial will be held at Immaculate Conception Catholic Church Cemetery in Millhousen, IN. In lieu of flowers memorial contributions may be made to St. Bartholomew Catholic Church. Survivors include his wife, JoAnn Brooks; children, Steven (Yanshuang) Brooks of Vancouver, WA and Greg (Nicole) Brooks of Hope, IN; sisters, Beverly (Robert) Jackson of Columbus, IN and Sue Tunny of Osgood, IN; 8 grandchildren and 2 great grandchildren. Dick was preceded in death by his parents, Charles and Mildred Brooks and a sister, Barbara Kendall. Arrangements are entrusted to Jewell-Rittman Family Funeral Home.

The family of Charles Richard "Dick" Brooks created this Life Tributes page to make it easy to share your memories.

Charles Richard “Dick” Brooks, 78, of Columbus, passed away on...

Send flowers to the Brooks family.