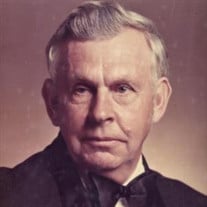 Cecil O. "Deak" Jackson, 97, of Columbus, died at 6:40 p.m. July 28, 2020, at his home. Deak was born June 10, 1923, in Bartholomew County, the son of the late Kenneth and Edith Patterson Jackson. He married Maxine R. Whittington February 13, 1960; she preceded him in death February 22, 2017. He was a WWII veteran of the U.S. Navy having served on the destroyer USS Hilary P. Jones, advancing from gunner to 2nd radioman. Deak worked throughout his life as a farmer. He was a member of the V.F.W. Post #1987, Moose Lodge, Elks Lodge, and a 75 year member of the Hope Masons Lodge #150 F&AM. The funeral will be conducted at 10:30 a.m. Monday, August 3, 2020, at Jewell-Rittman Family Funeral Home with the Rev. Marcus Speer officiating. Calling will be 2 to 6 p.m. Sunday and one hour prior to the service Monday. Burial will be at Garland Brook Cemetery with military honors presented by the Bartholomew County Veterans Honor Guard. Face mask are recommended. Memorials may be made to the V.F.W. Post #1987 in memory of Cecil. He is survived by his daughter, Patricia (Gene Carlton) Whittington of Morristown, Indiana; a brother, Charles (Patricia) Jackson; grandchildren, Beth James, Toni Roberts, Tim (Kris) Smiley and Terry (Lisa) Smiley; and 11 great-grandchildren and 12 great-great-grandchildren. He was preceded in death by his parents; wife, Maxine; stepson, Jerry Henry, and stepdaughter, Barbara Wilkerson; and brother Noble Jackson, and sisters, Ruby Wade and Ruth DeHart.

The family of Cecil O. "Deak" Jackson created this Life Tributes page to make it easy to share your memories.

Send flowers to the Jackson family.