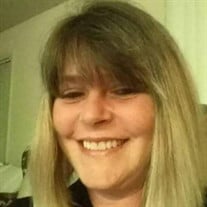 Catherine “Nay Nay” Dykes, 45, of Columbus, died at 8:58 am, Saturday, October 24, 2020, at Columbus Regional Hospital. Nay Nay was born September 6, 1975 in Columbus, the daughter of Marvin and Jeanetta (Davis) Durnil. She married Ronald Dean Dykes, he survives. Nay Nay was a hard worker and overcomer. She was currently employed by Valeo of Seymour. To Nay Nay, family and the grandchildren meant everything to her. She could often be found just sitting on the porch relaxing, playing games on her phone, on TIKTOK and talking to her companion of more than 30 years, Ron. A wonderful wife, mother and grandmother, Nay Nay will be missed by all that knew and loved her. The funeral will be at 11:00 a.m. Friday, October 30, at Jewell-Rittman Family Funeral Home with Pastor Rick Leonard officiating. Calling will be from 4:00 p.m. until 8:00 p.m. Thursday, October 29, 2020 at the funeral home and one hour prior to the service on Friday. Burial will be at Springer Cemetery. Memorials may be made to St. Jude’s Children’s Hospital or The Hope House of Prayer located at 514 Market St. Hope, IN 47246. Survivors include her husband; son, Christopher (Kayla Harris) Dykes of Columbus; daughter, Kelsie Dykes of Columbus; brother, Chuck Durnil of Columbus; sisters, Sandy (Jeff) Bush of Columbus, Tina Williams of South Carolina; grandchildren, Jayden, Jeremiah, and Karson Dykes, Isaiah Evenson and a grandson coming in February, Waylon Dykes. She was preceded in death by her mom, Jeanetta Durnil, a sister, Naomi Braton and her grandparents, Randal and Cassie Davis. Services were entrusted to the Jewell-Rittman Family Funeral Home. Jewell – Rittman Family Funeral Home would like to thank everyone in advanced for wearing masks and practicing social distancing while attending gatherings. You are invited to view her video tribute after 4:00 on Wednesday, October 28, light a virtual candle and send a message to the family via the internet.

The family of Catherine ReNae "Nay Nay" Dykes created this Life Tributes page to make it easy to share your memories.

Send flowers to the Dykes family.