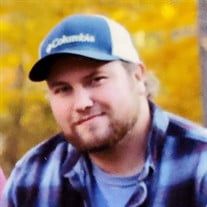 Brandon S. Hendershot, 26, of Columbus, died at 1:26 p.m. June 3, 2020, at Columbus Regional Hospital. Brandon was born February 2, 1994, in Columbus, the son of Jeff Lund and Misty Hendershot Crase. He was engaged to marry Jessica Deaver and they were expecting their first son together, River Hendershot. He was really excited for River’s arrival. He was a 2012 graduate of Columbus North High School and was currently employed by the City of Columbus Utilities Department. He was also owner and operator of the Bourbon Barrel Barn. Brandon loved to hunt, fish and ride motorcycles with his dad. He really enjoyed being outdoors, especially four-wheeling and boating. The funeral will be conducted at 11 a.m. Monday, June 8, 2020, at Jewell-Rittman Family Funeral Home with Pastor Robert Hurt Jr. officiating. Calling will be 1 to 5 p.m. Sunday and one hour prior to the service Monday. Burial will be at Garland Brook Cemetery. Memorials may be made to Centra Credit Union for his son, River, in memory of Brandon. Please make checks payable to Centra Credit Union with River Hendershot in the memo. Survivors include his parents, Jeff Lund and Misty (Scott) Crase, both of Columbus; his aunt who raised him, Melissa “Mimi” (Mike Harris) Hendershot of Columbus; finacée, Jessica (Myles Galyen and Asher Galyen) Deaver of Columbus; grandparents, Sharon Smith and Diana Hendershot, both of Columbus; great-grandmother, Donna Hendershot of Gnaw Bone; expected son, River Hendershot; brother, Corbin East of Columbus and sisters, Kaliah East, Sierra Lund, Ronna Crase, Quincy East and Cheyenne Lund, all of Columbus; a stepbrother, Keegan Crase of Columbus; future-in-laws, Jeff and Diana Deaver of Westport; along with several aunts, uncles and cousins. He was preceded in death by his best friend and grandfather, Ron Hendershot and grandfather, Charles DeWayne Lund; and great-grandparents, Robert and Kathleen Hurt and Herschel Hendershot. With the instructions issued by the State allowing gatherings of 100 people, we welcome friends to pay respects while continuing to follow social distancing guidelines. You may be asked to wait outside the building as we comply with this mandate.

The family of Brandon S. Hendershot created this Life Tributes page to make it easy to share your memories.

Send flowers to the Hendershot family.