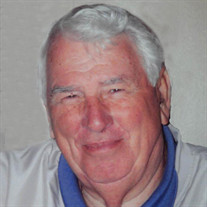 Bill Crase, 84, of Columbus, died at 6:12 a.m., January 26, 2021, at Silver Oaks Health Campus. Bill was born June, 24, 1936 in Letcher, Kentucky, the son James and Ethel (Caudill) Crase. He married Doris Begley on February 29, 1956. She passed away on September 8, 2019. Calling will be from 1:30 until 3:30 Monday, February 1, 2021, at Jewell-Rittman Family Funeral Home. Interment will be in the Garland Brook Mausoleum, Garland Brook Cemetery. The funeral service will be private, with Pastor Ancel Hardin officiating. Live Streaming of Bill’s service will be made available at 3:30 on Monday, February 1, 2021, by going to www.jewellrittman.com Jewell – Rittman Family Funeral Home would like to thank everyone in advanced for wearing masks and practicing social distancing while attending gatherings. Bill worked for Cummins for 26 years before retiring. He was one of the youngest to ever retire from Cummins at age 51. In his spare time Bill enjoyed golfing and watching his favorite team, the Kentucky Wildcats. Bill was a compassionate, caring man. He often helped people in need, such as mowing for widows and even lending out his car. Married for 63 years to the Love of his life, Bill loved one woman, Doris. A loving husband, father, grandfather and great-grandfather, Bill will be greatly missed by all that knew and loved him. Memorials may be made to Our Hospice of South Central Indiana through the funeral home.. Survivors include a son, Billy (Carla) Crase; a daughter, Debbie (Bill) Ayers, all of Columbus; brothers, Bobby (Phyllis) Crase, Charles (Audrey) Crase, all of Columbus, Roger (Vicki) Crase of El Paso, Texas, James (Ann) Crase of Snellville, Georgia and Kenneth Crase of Letcher, Kentucky: a sister, Susie Crase of Letcher, Kentucky; grandchildren, Dana, Chad, Ben, Eric and Brad; and nine great-grandchildren. He was preceded in death by his parents, a brother, Donald Crase and a sister, Dorothy Jones. You are invited to view his video tribute, light a virtual candle and send a message to the family via the internet. www.jewellrittman.com

The family of Bill Crase created this Life Tributes page to make it easy to share your memories.

Send flowers to the Crase family.