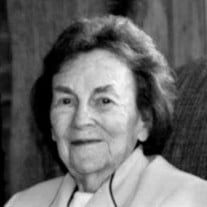 Betty Jean Roush Manuel, a native of Brown County, Indiana, went to be with the Lord on Monday, March 30, 2020. She was 93 years old. Betty was laid to rest at a private family graveside service at the Freetown Cemetery in Freetown, Indiana on Wednesday, April 1, 2020. Pallbearers were Moses Manuel, Justin Bryan, Zachary Dickerson, Kevin Roush, Craig Roush, Ben Miller. A celebration of life will be announced at a later date. Betty was born at home in Becks Grove, Indiana, to Paul Victor and Elizabeth Deitzel Phillips Roush. She was raised in a Christian family and attended the Becks Grove Church of Christ, now called Becks Grove Christian Church, where she made her profession of faith in Christ. She served as church secretary there for many years. She was united in marriage to Robert Bruce Manuel on October 24,1947, who preceded her in death on December 4, 1980. Survivors include her daughter and son-in-law, Marci and Terry White of Columbia,KY; a son and daughter-in-law, Dean and April Manuel of Brown County, IN, daughter-in-law, Pam Manuel of Toledo, OH; ten grandchildren, Ben (Andrea) White, Joey (Elizabeth) White, Bekah (Todd) McDaniel, Joshua (Jessie) Manuel, Nathan (Kendra) Manuel, Claire Kreinop, Isaac (Jessica) Manuel, Hilary (Justin) Bryan, Moses (Ashley) Manuel, and Amelia (Zachary)Dickerson; 25 great-grandchildren, she was expecting her 26th great-grandchild who is to bear her middle name; a brother, Charles (Brenda) Roush of Brown Co.; and a host of other relatives and friends. Betty was preceded in death by two sons, James Richard Manuel and Robert Bruce Manuel 2nd. The family has asked that expressions of sympathy take the form of donations to the Becks Grove Christian Church which can be mailed to: Becks Grove Christian Church, 8009 South Becks Grove Rd., Freetown, Indiana 47235 Jewell-Rittman Family Funeral Home was entrusted with the arrangements.

Betty Jean Roush Manuel, a native of Brown County, Indiana, went to be with the Lord on Monday, March 30, 2020. She was 93 years old. Betty was laid to rest at a private family graveside service at the Freetown Cemetery in Freetown, Indiana... View Obituary & Service Information

The family of Betty Jean Manuel created this Life Tributes page to make it easy to share your memories.

Send flowers to the Manuel family.