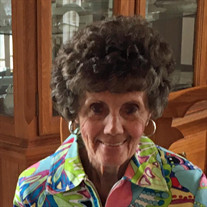 Barbara Ann Wasson, 85, of Columbus, died Thursday, December 23, 2021, at 10:15 a.m. at Compass Park Healthcare in Franklin, Indiana. Mrs. Wasson was born October 25, 1936, in Gary, Indiana, to Joseph and Edna (Manley) Trost. She married Delano Dwan Wasson in a garden wedding at his parents’ home in Hammond, Indiana, on June 26, 1955. Mrs. Wasson was a first generation Christian, having received Jesus as her personal Savior June 2, 1957. Mrs. Wasson attended Moody Bible College in Chicago, IL. She had worked as a district manager for Avon in Southern Indiana. She was an active member of Parkside Baptist Church and was active in the community, since moving to Columbus in 1969 from Hammond, Indiana. Mrs. Wasson and her husband owned and operated Green Barn USA Produce Company in Columbus for many years. Visitation will be at Jewell-Rittman Family Funeral Home in Columbus, Indiana, on Monday, December 27, from 5 to 7 p.m. The funeral service will be conducted immediately following visitation with Pastor Charles Kennedy officiating. The burial service will be held later that week at Bethesda Baptist Church in Herod, Illinois, on property that was donated by Mr. Wasson’s great-great-grandparents and where many of his ancestors are buried. She was preceded in death by her husband, Dwan Wasson, and a sister, Nancy (Trost) Nagy. Survivors include her children, Timothy (Debra) Wasson, Jeffrey (Patricia) Wasson, Jerome (Kimberly) Wasson, Beth (Glen) Haegele and Shawn (Tiffiny) Wasson; 10 grandchildren; and nine great-grandchildren.

The family of Barbara Ann Wasson created this Life Tributes page to make it easy to share your memories.

Send flowers to the Wasson family.