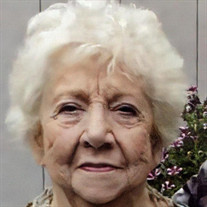 Aral Graham, 89 of Columbus went to be with her Lord on July 3, 2021 at her residence. Aral was born April 11,1932 in Evansville, Indiana, the daughter of Frances J. and Ivan J. Barnett. She graduated from Columbus High School in 1950. She married Gerald “Jerry” L. Graham on June 20, 1954. He proceeded her in death on September 12, 1981. They were married for 27 years until his untimely death. Aral was a member of Crossroads Community Church. She loved the Lord and He sustained her through-out her life. Aral first worked in the accounting department at Como Plastics, in Columbus. She then worked at Cummins Inc. starting as a Clerk in the insurance Department in 1952; worked various secretarial jobs in both Sales and International Departments. From 1973 until retirement Aral learned skills “on the job" and was able to use those skills by doing graphic design work in the Sales Promotion Department. After retiring in 1995 she opened her own business "Graham Design" until 2001. Just before retiring, Aral entered her one and only "art" contest which was for a poster advertising for the orchestra performance at "POP Fest” held every year in front of the library. Her entry won first place! Aral always said she was very fortunate to have her job at Cummins, which she loved. She worked with many, many employees at Cummins and Cummins distributors, and truly loved that part of her job. She had a couple of hobbies that she enjoyed as well. Aral collected Swans, glass, ceramic, wood, jewelry, etc. Her other hobby was enjoying her flower garden that her son created for her. Every spring she was able to make bouquets with the beautiful flowers that came back year after year. The funeral will be conducted at 1 p.m. Friday, July 9, 2021 at the Jewell - Rittman Family Funeral Home with Pastor Tracy McIntyre officiating. Calling hours from 11 a.m. Friday until service time at 1 p.m. Friday. Burial will be at Garland Brook Cemetery. Memorial contributions may be made to Crossroads Community Church. Survivors include a daughter, Connie S. (David) Parker of Columbus; sons Michael I. Graham of Danville, KY, and Thomas K. Graham of Columbus; a grandson Gerald G. Parker and great-granddaughter Harlo G. Parker of Columbus; a sister Judith I. Zeigler and a brother Donald T. (Barbara) Barnett of Louden, Tennessee. There are several nieces and nephews as well. Aral was preceded in death by her husband Jerry; her mother and father; a son Bobby L. Graham; a brother Ivan G. Barnett and his wife Juanita. You are invited to view her video tribute, light a virtual candle and send a message to the family via the internet. Information: www.jewellrittman.com.

Aral Graham, 89 of Columbus went to be with her Lord on July 3, 2021 at her residence. Aral was born April 11,1932 in Evansville, Indiana, the daughter of Frances J. and Ivan J. Barnett. She graduated from Columbus High School in 1950. She... View Obituary & Service Information

The family of Aral S. Graham created this Life Tributes page to make it easy to share your memories.

Aral Graham, 89 of Columbus went to be with her Lord on July...

Send flowers to the Graham family.