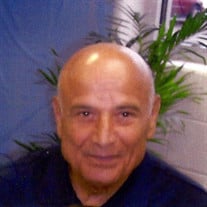 It is with great sadness that we announce the passing of Amarjit Singh Ghuman (Vic, Victor) on September 5, 2020. Amarjit was born in the village of Ghuman, India on April 13, 1936. The son of the late Dasondha and Har Ghuman. His childhood was impaired with the partition of his village and Pakistan. A memory that stayed with him forever. Vic graduated from high school at the age of 16 as valedictorian of his class and was an outstanding soccer player. His ankles had the cleat marks to prove it. He went on to receive his bachelor’s degree from Punjabi University. At the encouragement of his older brother, he set his sights on coming to America. He spent a year traveling around the world on a cargo ship before arriving in New York City via the Queen Mary in 1956. From there, he took a bus to Chicago where he worked many jobs to put himself thru the Chicago Institute of Technology earning three masters degrees. On a sightseeing visit to Columbus, IN and a hiring sign, Vic began his career in 1967 at Cummins Engine Company and retired from there. His contributions and accomplishments at R&D are too numerous to mention. But the friendships he made all over the world stayed with him for the rest of his life. Vic was a self-taught golfer, who never stopped learning the game. His beloved Otter Creek became his second home. He played more rounds at Otter than probably anyone and thrived on the competition. Whether a tournament or a round with the guys, he gave it his all. He proudly won several Otter Creek Championships, 6 holes in one, and numerous trophies. Golf allowed him to make new friends and lifelong friendships. At the young age of 83, he was still able to score below 80. Vic loved his family, he loved life, and the many friends he made. One of his proudest moments was November 17, 1970, when he became a citizen of the United States of America. Vic is survived by his loving wife of 42 years Marius Hungerford Ghuman. His daughters Patricia Ghuman-Barrix (Scott), Sue Ghuman Perry (David), step-daughter Christina Ghuman Tipton (Davin) and son Tom Ghuman (Kimberly). His grandchildren Cody Matthew and Gabriell (Gigi) Ghuman, Jonathon and Joshua Perry, and Allison and Joseph Ghuman. Brothers Dr. Harbans Singh and Balwant Singh. Vic who never met a stranger was blessed to be loved by many. We thank each and every one of you for your support at this time. And to Vic’s newest friends in 2020. Know that he was blessed to have you in his life. Someday we may be able to celebrate Vic’s life, listen to the stories, and see our friends and family. But sadly for now there will be no services. Thank you to Jewell-Rittman Family Funeral Home for making all the arrangements and your sincere kindness to our beloved Vic and his family. In memory of Vic, please pray for everyone going thru this difficult time and for this country that he so loved.

It is with great sadness that we announce the passing of Amarjit Singh Ghuman (Vic, Victor) on September 5, 2020. Amarjit was born in the village of Ghuman, India on April 13, 1936. The son of the late Dasondha and Har Ghuman.... View Obituary & Service Information

The family of Amarjit S. "Vic" Ghuman created this Life Tributes page to make it easy to share your memories.

It is with great sadness that we announce the passing of Amarjit...

Send flowers to the Ghuman family.