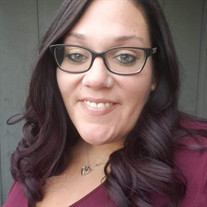 Amanda Jean Brown, 37, of Columbus, passed away at 2:37 P.M. Friday, April 23, 2021, at Columbus Regional Hospital. Amanda was born August 30, 1983, in Columbus, Indiana, the daughter of Marvin Brown and Linda Rosemeyer Everroad. Amanda was employed at Dia & Co. She loved mushroom hunting, going fishing, baking, and being outdoors. She enjoyed traveling but especially going to Florida and loved spending time with her family and friends. The funeral will be at 1 p.m. Thursday, April 29, 2021 at Jewell ~ Rittman Family Funeral Home with Pastor Timmy Poer officiating. Calling will be from 10:00 A.M. until 1:00 P.M. Thursday at the funeral home. Following the service, she will be laid to rest at Garland Brook Mausoleum. Memorials may be made to the funeral home to help with the final expenses. Her survivors include a daughter, Kaileigh Miller of Columbus; parents, Marvin (Brenda) Brown and Linda (Mark) Everroad; a brother, Marlin (Denise) Brown of Franklin; sisters, Marilyn J. (Greg Mitchell) Luttrell of Cincinnati, Ohio, Nataline (Jimmy) Weddle of Columbus and Nicole (Zach) Roberson of Columbus; grandparents, Wilma Forbes and Virginia Rosemeyer; her boyfriend, Shawn Mann of Columbus. She was preceded in death by her brother, Michael Brown; grandparents, Rev Carlis and Gervis Brown, Otis Rosemeyer and James Forbes.

The family of Amanda Jean Brown created this Life Tributes page to make it easy to share your memories.

Send flowers to the Brown family.