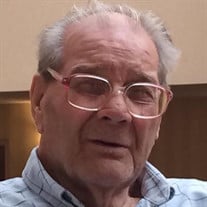 Alpha Omega Fisher, 95, of Columbus, died at 4:50 a.m., Tuesday, December 31, 2019, at Hickory Creek Health Care. Alpha was born October 4, 1924, in Maple Hill, North Carolina, the son of Cephus and Florence Fisher. He married Nina Boling on September 23, 1951. Al worked for Arvin’s and as an auto mechanic for many years. He proudly served his country in the United States Army. In his leisure time Al loved to go hunting and spend time with his dogs. He will be greatly missed by all that knew him. The funeral will be at 2 p.m. Monday, January 6, 2020, at Jewell-Rittman Family Funeral Home with Melvin Lykins officiating. Calling will be 1 to 5 p.m. Sunday and one hour prior to the service on Monday. Burial will be at Garland Brook Cemetery with military honors performed by the Bartholomew County Veterans Honor Guard. Memorials may be made to the Alzheimer’s Association. Survivors include a son, Larry (Sharon) Fisher; a daughter, Rebekah Howe; grandchildren, Nicole (Toby) Dever, Gena (Ryan Hewitt) Howe, Sean Howe, Julie (Jesse Shea) Howe, Micah Fisher, Heath (Amy) Fisher; and great-grandchildren, Reece Fisher, Jasmine Fisher, Kyree Ann Howe, Hadley Dever, Kenton Howe, Hudson Dever, Jamison Howe-Shea, and Josie Howe-Shea. He was preceded in death by his wife; three brothers; and four sisters.

The family of Alpha Omega Fisher created this Life Tributes page to make it easy to share your memories.

Send flowers to the Fisher family.