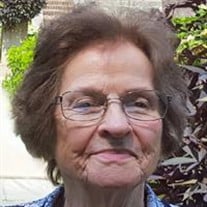 Alice Purtlebaugh, 89, of Columbus, died at 11:57 a.m. July 22, 2019, at Franciscan Health South Indianapolis. Alice was born February 25, 1930, in Columbus, the daughter of Russell and Madalyn McNear Settles. She married Samuel Purtlebaugh October 22, 1955, and he preceded her in death August 25, 1999. She was a member of the East Columbus United Methodist Church and had volunteered at the Senior Citizens Center. The funeral will be conducted at 10 a.m. Friday, July 26, 2019, at Jewell-Rittman Family Funeral Home with Chaplain Elaine Clark officiating. Calling will be 4 to 8 p.m. Thursday and one hour prior to the service. Burial will be at Garland Brook Cemetery. Survivors include her sons, Robert E. Drake of Hope and Gary (Sylvia) Drake of Brownstown and daughter, Nancy Wood of Winchester, Virginia; sisters, Mary Helen Phillips of Columbus, Ruth Virginia Doles of Zephyrhills, Florida, Emily Ann Mabe of Columbus and Barbara Jane VanZandt of Phoenix, Arizona; grandchildren, David Drake, Aaron Drake, Bryan Drake, Allison Drake, Ted Mitchell, Carmen Orndorft, Joyce Copeland and Jennifer Haggerty; 11 great-grandchildren; and 17 great-great-grandchildren. She was preceded in death by her parents; husband, Samuel; brothers, Marion Robert Settles and Charles R. Settles and a sister, Evelyn Catherine Settles; and a grandchild, Rodney Drake. You are invited to view her video tribute, light a virtual candle and send a message to the family via the internet.

The family of Alice Purtlebaugh created this Life Tributes page to make it easy to share your memories.

Send flowers to the Purtlebaugh family.