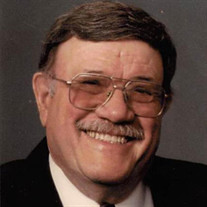 Alger “Al” Satterfield’s work on earth is done. Al 89, of Columbus, passed away Monday, June 14, 2021, at Our Hospice of South Central Indiana. Al was born in Jefferson County, Tennessee, the son of Frank Ray and Josie Avo (Gann) Satterfield on November 10, 1931. The family moved to Indiana in 1937. Al graduated from Frankfort Pilgrim Holiness in 1949. There he met Shirley B. Johnson and they married on 3-25-1950. To this union 4 children were born. Al served in the Army during the Korean War and after his return, put himself through college building homes. He graduated from Purdue University in 1960. He worked for Sunstrand Aviation in Rockford, Illinois for ten years before returning to Indiana and joining Cummins Engine Company. He retired from Cummins in 1996. Al loved sports and playing Euchre. He enjoyed the satisfaction of remodeling homes and traveling with family and friends. Most of all, he valued a strong work ethic and devotion to family. The funeral will be at 10:30 a.m. Friday, June 18, 2021, at Jewell-Rittman Family Funeral Home with the Rev. Virgil Clotfelter officiating. Military Rites will be performed by the Bartholomew County Veterans Honor Guard. Calling will be from 9:00 a.m. until 10:30 a.m. prior to service time. Burial will be at Clarksburg Cemetery in Clarksburg, Indiana at 1:30 p.m. Memorials may be made to the Our Hospice of South Central Indiana or The Alzheimer’s Association. Survivors include his wife, Rose Hayes Satterfield of Mesquite, TX.; daughters, Deborah Satterfield of Columbus, and Ellen Satterfield of Bargersville; grandchildren; Benjamin (Kelly) Hammer, Kathryn (Josh) Bond, Lindsay (Jared Stillabower) Boyer, Leah Boyer, Christopher Wolf, Ashley (Adrian Sullivan) Wolf, Jesse (Amber Haley) Wade, Rachael (Zachary) Badger; and 8 Great-Grandchildren. He was preceded in death by his parents; brothers, James and Sam Satterfield, his first wife, Shirley Satterfield; a daughter, Constance Ackeret; a son, William Satterfield; a daughter-in-law, Terri Satterfield; and a grandson, Michael Shane Satterfield.

The family of Alger "Al" Satterfield created this Life Tributes page to make it easy to share your memories.

Send flowers to the Satterfield family.