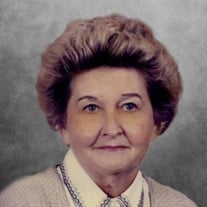 Aleta Rose Lewis passed away on March 27, 2022. She was married to Maynard Lewis in September 1951. He preceded her in death on December 20, 2011. Aleta retired from Cummins Engine Company as an executive assistant. Born to Victor and Georgia... View Obituary & Service Information

The family of Aleta Rose Lewis created this Life Tributes page to make it easy to share your memories.

Send flowers to the Lewis family.