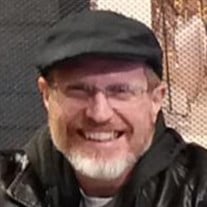 Albert Monroe Hobson, 56, of Taylorsville, died August 17, 2020, at his home. Albert was born January 2, 1964, in Indianapolis, the son of the late Charles M. and June A. Honea Hobson. He married Shelly Key February 5, 1994. He was a 1982 graduate of Perry Meridian High School and attended Ivy Tech. For 22 years he was employed at Columbus Container and last worked for Hobson Tool and Machine. Albert was a member of The Rock Free Methodist Church. He had a wide variety of interests including trains, fish, motorcycles, elephants, Purdue basketball, and collecting Santa Clauses. He enjoyed kayaking with his sons, camping, travel, and spending time with his family. The funeral will be conducted at noon, Thursday, August 20, 2020, at The Rock with Pastor Brian Buterbaugh officiating. Calling will be 10 a.m. to service time. Burial will be at Forest Lawn Cemetery in Greenwood. All visitors are required to wear face masks. Survivors include his wife, Shelly; sons, Albert C. (Angel) Hobson, Jordan M. (Haley) Hobson, and Bradly C. Hobson; brothers, Earl L. Hobson and Carl D. Hobson; and grandchildren, Hadley J. Hobson and he was looking forward to the birth of his granddaughter, Evie Hobson.

The family of Albert Monroe Hobson created this Life Tributes page to make it easy to share your memories.

Send flowers to the Hobson family.